Home / All Things Greencastle / Strictly Business: Life at Both Ends of the Monon

Strictly Business: Life at Both Ends of the Monon

Vincent Aguirre: A Life for Himself

I suppose I am, in some ways, my parents’ worst nightmare: I am the kid who went to college and never left.

For better or worse, I have always been attracted to the college experience.  Growing up, I would hijack family vacations to make sure we drove to and through any college within a half hour of our planned route.

As a kid, I can remember rides to Bloomington listening to John Mellencamp, working on my math homework on the way to watch the Hoosiers play basketball.

I can still hear the roar of the crowd and the thunder of tens of thousands, both young and old, belting out the words to “Indiana, Our Indiana.”

I can see the pageantry and revelry of the Red Steppers, crisscrossing the court with flags that spell out “I-N-D-I-A-N-A” to the William Tell Overture.

If I had to recall when and where I fell in love with college, it would have to be those cold, snowy nights, watching IU Basketball.

For the longest time, I thought I would end up going to school at IU.

I mean sure, I grew up in Greencastle, home to DePauw University, and its 2,400 students.  I went to school with the children of outstanding professors of English, Math, Geology, and Economics. On Saturdays, I would head over to Blackstock Stadium with my friends and watch the Tigers play football under Coach Nick Mourouzis. I would ride my bike through campus, feed the goldfish in Bowman Pond, and enjoy GCBs at Marvin’s, but that did not feel like college.

Occasionally, my friends and I would sneak into Blackstock to watch the Monon Bell Classic, the rivalry football game between DePauw and Wabash College.  The games were exciting—I was there for the Monon Miracle in 2001 when Wabash quarterback Jake Knott threw a last-second touchdown pass to Ryan Short, who tipped the ball back to Kurt Casper for the game-winning score. However, in front of only 10,000 people, it was not exactly front-page news.

My entire college worldview was based on the commercialized nature of college sports.  It was multimillion-dollar TV contracts, sold out stadiums, and players more focused on shoes than their studies.

When the time came to start my college search, it seems like a fait accompli.  That was, until I made my first college visit at IU.  I was able to see, for the first time, what it would be like to live and learn among 40,000 of my closest friends, in lecture halls large enough to fit 300 people (twice the size of my high school’s graduating class).

Soon, it became clear that my expectations for college needed to change.  If I wanted to be successful, I would need to go to a much smaller school.  That is not a knock on large schools—I believe you can get a great education anywhere.  However, I think people need to be honest with themselves and recognize what kind of an environment they need in order to be successful.  For me, that meant going to a smaller college.

Looking back, my initial priorities in choosing a college were misguided.  I was too focused on the festive atmosphere of big-time college sports to notice what I truly loved about college: the people and the places.

So, I set my sights on something a little smaller.  I went on visits to Northwestern and Miami, but left unimpressed.  DePauw was way too close to home (I literally grew up across the street from campus).

Yet thirty miles up the road was Wabash.  A place I initially refused to consider.

And who wouldn’t?  For a kid who grew up dreaming of the big stage of the Big Ten, the idea of going to an ALL MALE college of 900 students in Crawfordsville, Indiana, seemed like the worst place for a young man to spend his college years.

But Wabash was persistent in their recruitment, and my Mom insisted I visit.  I was skeptical at first, but soon fell in love with the campus and its people.

At Wabash, I found a place where everyone was united by a common purpose—the pursuit of teaching young men to think critically, act responsibly, lead effectively, and live humanely.  I found a place where people were genuinely interested in me and had a strong desire to see me succeed.  After my first visit, I got in the car and told my parents I wanted to be a Wabash Man.

Looking back, my initial priorities in choosing a college were misguided.  I was too focused on the festive atmosphere of big-time college sports to notice what I truly loved about college: the people and the places.

It was redbrick and limestone buildings surrounding slanted sidewalks and picture-perfect lawns.

It was professors who truly cared about their studies and their students; who were dedicated to helping others make new discoveries about the world and about themselves.

It was generations of alumni who so cherished their college years that they would come back and give back, year after year, to help relive the past and provide for the future.

And yes, it was crisp, Fall Saturdays, basking in the warm sunlight and a gentle breeze, watching my classmates and friends play the game we all loved.

The Wabash—DePauw rivalry is, in many ways, like most college rivalries. Two teams, close in proximity, but light-years apart in world-view, competing on the gridiron for bragging rights and football supremacy.

But for me, it’s different.

I am extremely proud of Greencastle, and the town it has become, thanks, in large part, to DePauw University.

I am incredibly thankful for the opportunities I have had to meet and learn from outstanding people at DPU: Tom Chiarella, Joe Heithaus, Coach Nick, Bill Fenlon, Leslie James, Clarissa Peterson, Erin Mahoney, Dave Gellman, and Brian Casey.

On Saturday, when Wabash and DePauw square off in the 124th Monon Bell Classic, it’s strictly business.

Two teams will compete for a 300 lb. bell donated from the Monon Railroad, which, at one time, connected Lafayette, Crawfordsville, Greencastle, and Bloomington by rail.

Thousands of alumni will gather and cheer their lungs out for the Tigers and Little Giants.

One team will emerge victorious, the Bell and bragging rights secured for another year.

And one fan will look up at the sky; bask in the sunlight, and smile, reflecting on how lucky he has been to live such a life in such a place. 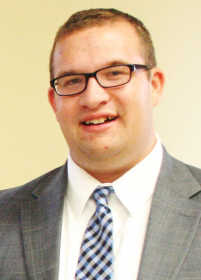 After earning his bachelor’s degree from Wabash and his master’s degree from Miami-Ohio, Tyler Wade returned to Greencastle, where he currently serves as city councilman from the 4th ward.
Share
Previous A Manuscript Tale: Sheets in the Wind
Next Vignettes: Cari Ray

Twenty years ago I began my first year at Greencastle High School.  In the two …