Home / Opinion / Celebrating Hanukkah in a Sea of Red and Green

Celebrating Hanukkah in a Sea of Red and Green

We have reached that time of year. The lights, red ribbons, and pine boughs have gone up on the square; lawn decorations from the tasteful to the fun to the garish adorn our residential streets; the town looks festive and inviting; and kids and parents alike are counting the days until winter break. Holiday music pervades the airwaves, from the crooners singing “White Christmas” in the bank lobby to “Jingle Bell Rock” in the CVS; and Kroger is stocked with inordinate amounts of green and red sprinkles.

For most folks in Greencastle, all this festivity and good cheer feels comforting and welcoming. But at this time of the year my family, and my kids especially, cannot help but feel a tinge of separation, even exclusion. “Where are the Hanukkah decorations?” asks my youngest son. Youth is eternally hopeful. He has not yet come to the realization that the vast majority of people in Greencastle celebrate Christmas. Personally, I have long since given up looking for Hanukkah wrapping paper, cards, or even blue sprinkles in the Kroger. There is always Amazon.com.

But one cannot completely avoid actual stores for an entire month. So, there we are in a checkout line. “What is Santa bringing you for Christmas this year?” The voice is friendly and the question—directed at my kids—is innocent enough. It is not a single voice; we have heard it before. The kids usually sigh before responding: “We don’t celebrate Christmas.” Then comes the raised eyebrow and the glance—directed at me—that silently asks, “What kind of terrible parent are you not letting your kids celebrate Christmas?”

Whatever holiday or festival we choose to celebrate, whatever decorations we do or do not display in our homes schools, and businesses, whatever services we do or do not attend, and whatever foods we eat, I hope that at this…time of the year, we can all bring more light into our lives, affirm our love for our family and our neighbors, and wish each other peace and joy in the year to come.

I want to explain that we are Jewish, that we celebrate Hanukkah, and that, in fact, this is not all that unusual. In New York, Boston, Chicago, or any part of the U.S. where there is a significant Jewish population, families and communities celebrate the “festival of lights,” which commemorates the Jewish people’s struggle for freedom against an oppressive regime and the subsequent miracle of the oil when a single flask lasted for eight days. In the 2nd century BCE, the Seleucid Greeks tried to compel the Jews to give up their religion and worship only Greek deities, and in the process they sacked the Temple in Jerusalem. The Jews, led by a band of brothers called the Maccabees, revolted and eventually defeated the superior Greek army. When they went to rededicate the Temple by lighting the holy lamp, they were surprised and delighted to find that the lamp burned for eight days with only a tiny bit of oil. Hanukkah means “dedication” in Hebrew. We celebrate by lighting one additional candle in the menorah (candelabrum) each night for eight nights, and we eat foods cooked in oil, such as potato pancakes (latkes) and jelly donuts (sufganiyot). For Jews all over the world, the light of the candles burning in the menorah symbolizes the hope and joy that comes with freedom. I want to share that sense of joy with those unfamiliar with Hanukkah, but how do I convey the entire history of a religion and its traditions over 30 seconds in a checkout line?

On a recent trip to the east coast, I was reminded of how normal Hanukkah is in other parts of the country. I popped into a CVS in Sharon, MA to buy some water and a newspaper. As I headed to the refrigerator cases at the back of the store, I was caught up short by an entire aisle dedicated to Hanukkah decorations. The shelves were stocked with cards, wrapping paper, Hanukkah-themed toys, and candy treats. I actually thought to myself, “who is buying this stuff?” Then I remembered that I was on the South Shore of Boston where every third person is Jewish. This is close to where my grandparents lived when I was growing up and I spent most of my summer holidays with them. In Sharon, as in many places in and around big cities, Hanukkah is not a novelty; it is part of the season. I grabbed a roll of wrapping paper. No need to explain anything in the checkout line.

For a period of time—from intermediate to middle school—my older boys avoided going into stores during the holiday season. They simply found the Christmas displays overwhelming, one more reminder that our family was unusual, outside the norm, other. Now as high school students, they are more secure in their identity. Moreover, the close-knit Greencastle community has become their support network. Their friends, teachers, and neighbors no longer consider them strange for not celebrating Christmas, and they confidently wear their “ugly Hanukkah sweaters” to school on “ugly Christmas sweater day.” This year, our youngest took it upon himself to go to the principal to ask if he could bring in a menorah for the school’s holiday display. I am proud of him for his initiative, but I have to ask, “Why didn’t the school put up a menorah? What if there were no Jewish kids in the school? Would anyone bother to acknowledge other holiday celebrations? And, more importantly, how does that help our children learn to appreciate and value the traditions of others?”

My husband and I strive, with more or less success, to teach our children to respect others but also to stand up for themselves. Sometimes, however, it is just easier, and possibly safer, to fade into the background. As anti-semitism in the United States is coming out of the shadows, I catch myself hesitating to identify myself and members of my family as Jewish, especially to people I have just met. Let’s be honest. Historically, Indiana does not have a great track record when it comes to combating racial, ethnic, and religious discrimination. It can sometimes feel like we are living on the frontier. Interestingly, in 1899, Indiana’s Jewish population was 25,000 (tied with New Jersey). The current population is only 17,000, despite the fact that the overall US Jewish population has increased by almost 6 million.

Nevertheless, being on the frontier can have its advantages. We have forged our own traditions for the holidays. For the last ten years or so, we regularly celebrate Hanukris (or Chanuchris—no one knows the proper spelling because it was invented by our middle son and his best friend), which involves getting together with close friends, exchanging gifts, and sharing the season over a beautiful roast (lamb, goose, turkey, or whatever else we feel like cooking), potato latkes, and a traditional mid-western casserole (which we jokingly refer to as the ‘Christian side dish’). Our family’s holiday season is no longer complete without Hanukris.

Whatever holiday or festival we choose to celebrate, whatever decorations we do or do not display in our homes schools, and businesses, whatever services we do or do not attend, and whatever foods we eat, I hope that at this coldest and (technically) darkest time of the year, we can all bring more light into our lives, affirm our love for our family and our neighbors, and wish each other peace and joy in the year to come. 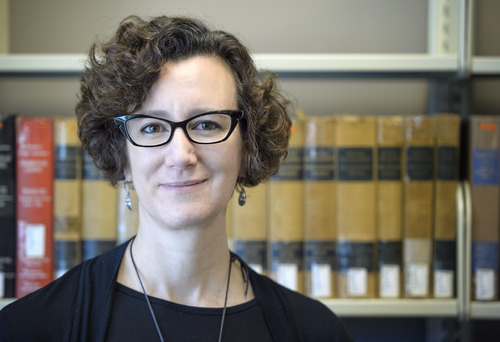 Rebecca Schindler has been teaching Classics and Classical Archaeology at DePauw University for 18 years. She spends her summers in Italy where she is the director of the Lago Trasimeno Archaeological Project. She lives in Greencastle with her husband and children

Previous The Singularity of Adam Tran
Next Songs You Should Have Heard: Gus Moon’s “Ticket-Taker Blues”